I must apologize to both of you loyal readers for my blog absence of late, but I’ve been peregrinating.

Thanks for asking. Among my many travels along the beautiful I-94 corridor, my course has taken me further and further from any type of media, including the internet, texts, emails, Farcebook, Lookitmei’mLinkedIn, Pintwhocares, Instagrams, Skype, carrier pigeons, smoke signals, sky-writers, or Navaho code-talkers.

Because the incessant, relentless connectedness which these mediums afford, only serve to broadcast the demise of civilization, which, you know, is such a downer. The current poster child of which is this woman: Naveena Shine.

Uh huh. I see. I’m sure there’s a LinkedIn group for that if you’re interested, and if you spend all your waking hours updating LinkedIn, then you probably are.

Well…that’s just a bit more than I can take. I’m just going to go over here and sit in a corner until this all clears itself up m’kay? I may sing quietly to myself if you don’t mind.

END_OF_DOCUMENT_TOKEN_TO_BE_REPLACED

…but I haven’t got the time. 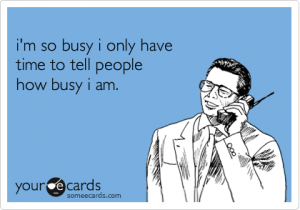 I had a recent email exchange with a friend who was bemoaning their inability to get anything done because they’re too busy.

Think about that for a minute.

One of the more insidious diseases to infect modern man is incessant “busyness.” I think this is partly due to the very admirable trait of a strong work-ethic, common to most Americans, especially people with children. On the run from dawn to dusk, working, keeping house, caring for the kids, chauffeuring them to their various extra-curricular activities and so on, they exhibit all the symptoms of the disease in its most advanced form. However, in the rush of daily living, these things take on a life of their own, by sucking the life from us, often without our even knowing it.

END_OF_DOCUMENT_TOKEN_TO_BE_REPLACED 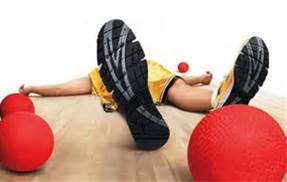 In my daily ramblings through the murky undergrowth of the internet in search of entertainment for y’all, I want you to know there are some places I will never go. Like Slate. Somehow though, through careless link chasing, that’s exactly where I landed. It just goes to show ya, that if you take your hands off the wheel for even a second, you can find yourself in some bad juju.

Anyhow, I happened on this article written by Jessica Olien, entitled “Dodgeball Should Not Be Part of Any Curriculum, Ever.” As with any train wreck, I couldn’t look away. I’m sure Ms. Olien wrote this with her tongue firmly in her cheek…right?

END_OF_DOCUMENT_TOKEN_TO_BE_REPLACED

The White House, so supposedly the President, anxious to pass their version of immigration reform is laying on a social media blitz. Here is a recent Tweet which drew some media attention:

Unless you’re a Native American, you came from someplace else. Share your family’s story: http://at.wh.gov/kQgOt  #ImmigrationNation

Uh, see, here’s the thing: If by “Native American,” you mean someone who was actually born here—and what else can those words mean?—then guess what? I am a native American! Born in Kalamazoo, Michigan at Borgess Hospital. Last I looked, the State of Michigan is part of America. My parents were born in Ohio. America? Check. Okay, my grandparents were born in Europe, but they immigrated here…legally.

Now, I make no bones about my disgust with this administration. I vote, and I didn’t vote for them, so I get to complain.

The American people are not stupid, appearances to the contrary. This tweet is nothing more than a craven attempt to blur the lines between citizens and immigrants, some of whom are attempting to follow the rules and immigrate legally. Others, not so much.

There’s a reason why everyone wants to come to the United States. There is no freer place on the planet, which is as tolerant of others, and more willing to let a person succeed or fail as long as they play by the rules.

Let ’em all come, but do it legally. Is that such a big deal? If you’re here illegally, go home and come back the right way. If you’re here illegally through no fault of your own—say, because of your parents—we can make some accommodations for your family. But quit hiding and come out in the open. America’s a big place with plenty of room for new law-abiding, productive citizens.

The White House would prefer to insult our intelligence and undermine our national character in the name of political expediency. Well, I ain’t havin’ it!