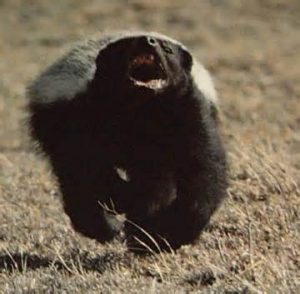 Author’s Note: Please excuse any typos in this post, I can only use six fingers.

So, there I was just the other day, sitting in my comfy chair re-reading War & Peace, looking for all the hidden Easter eggs—like ya do—when all of sudden, there came a loud crash from over my shoulder!

I sprang to my feet and spun around. There, not ten feet away, was an angry honey badger standing amidst shards of glass that had once been my window. He was clearly out for no good.

My first instinct was to run, but I knew that an enraged honey badger can outrun a cape buffalo over short distances. Being slightly heavier and marginally less fit than a cape buffalo, I decided to stand my ground.

We both stood stock still, eyeing each other, sizing each other up, then slowly we began to circle one another in a kind of demented death-polka, his eyes locked on mine like a cat staring at a unattended plate of sole meuniere.

As we circled, I began to hear a low, guttural, unnatural sound, something akin to a huffing whimper. Knowing that honey badgers can emit strange sounds when under duress, I kept myself on guard for any sudden movement (yeah, so? I know a lot about honey badgers).

Round and round we went, drawing closer with each circuit. All the while that hideous, pathetic, simpering sound got louder and louder until I thought I would go mad from its unearthly resonance.

Then I realized I was making the sound and stopped it.

Suddenly, the honey badger stopped circling and—I still shudder when I think of it—smiled at me. Knowing what I know about honey badgers (which I admit is a great deal and not at all normal for someone who didn’t just google “honey badgers” on the internet), I sensed this was not a good sign.

I frantically began searching for some weapon with which to defend myself: a bottle, a vase, a .45-70 Winchester, anything, when it occurred to me that I was still holding Tolstoy’s masterpiece in my trembling hand.

Now it is well known that War & Peace is the densest, most deadly book in literary history. Tolstoy’s wife once dropped the completed manuscript on her foot. Broke four bones. True story.

Anyway, armed with the greatest novel in history my courage began to revive. I waved it menacingly at the slavering, smiling beast before me.

Perhaps I should have thought it out a little further, as this turned out to be a bad idea.

As if to say, “Twelve hundred pages of Russian novel and most of it’s in French?!” he growled and leapt for my throat.

I ducked and thrust the book toward him, blocking his attack. His fangs sank in all the way to the battle of Borodino! While he struggled to pull free, I rolled toward the open window seeking to escape a second attack, but it was too late.

With a mighty pounce, he was on me.

We flailed back and forth in a desperate struggle, neither gaining the advantage, but neither willing to give quarter. After three quarters of an hour (I swear!) our battle seemed at a stalemate, when entirely by chance, my hand fell on a piece of broken glass.

I grabbed it as my last hope. Trembling with rage and fear, I raised it above the honey badger’s head and was about to thrust it down on him and thus end the madness, when he swatted my arm away and dove out the window the same way he’d come in.

For a long time I sat in the wreckage of my little room, nursing my right hand which was badly lacerated by the glass. As blood pooled around my ankles, I surveyed the damage.

“No one will believe me. How will I tell the insurance company? What about the doctor?”

Then I noticed he had stolen my wallet.

I’m the victim of a strange disease that only attacks males past 50 years of age of northern European descent that turns your hand into a claw and had to be surgically repaired.

Either way, I got some great scars!