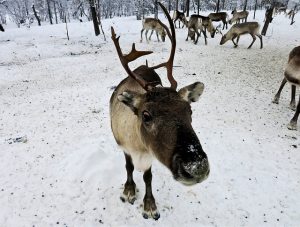 In keeping with the season, today I have a special treat for you!

I managed to score one of the hardest “gets” in the holiday blab-circuit pantheon. Someone who is notoriously shy and reticent, someone who almost never consents to interviews, yes, you guessed it, please welcome Santa’s starting left-rear reindeer, Donner!

Rob: Wow! I can’t believe you’re really here in my unabomber-style van! What an honor and privilege this is!

Donner: Um, yeah. Hi. Uh, could you move the disco ball? It keeps knocking me in the antlers…Thanks, that’s better.

Rob: So, first things first: I’ve never interviewed such a famous reindeer—well, none actually—what should I call you? Mr. Deer, Mr. Donner…

Rob: Donner it is! So, Donner, what made you consent to this interview? I mean we see you guys every year, but hardly ever hear anything about you.

Donner: Well, to be honest, it was my publicist’s idea.

Rob: Oh, so you have your own PR team?

Donner: Not exactly. You see, the NFL—that’s Northpole Financial Licensing Corp. has a team of PR flacks. They strictly control our image, press features, appearances, you know at malls and so forth…

Donner: That’s really a matter for the courts. We’ve been litigating it for decades. Anyway, we had the name first…Ya know, it’s funny; but when you come to think about it, there are a lot of similarities between the two organizations. Well, no matter. Where was I?

Rob: You were talking about your publicist?

Donner: Oh, yeah. As I was saying, in this instance, it was my personal publicist who made the suggestion. Look, I know Mr. Claus frowns on anything that smacks of self-promotion—at least for anyone other than him—he’s all, “There’s no ‘I’ in team.” And, “Everyone rows the boat.” You, know. Well, I for one am sick of that crap! I’m an individual. I’m not just another sheep, er, deer, in a vast herd doing whatever some dude in a red suit tells me. I’m an individual and I want to tell my own story!

Rob: I see. You want to show us the deer behind the deer, so to speak?

Donner: Precisely! That’s why I’ve written my new autobiography, From Deer to Eternity: An insiders view of the Christmas-Industrial Complex.

Rob: Quite a title. But if you don’t mind my saying so, it sounds kinda…harsh, doesn’t it?

Donner: Hey, it’s meant to grab your attention, shake you up. Look, I’m through sugar-coating things just to get along. I’ll leave that to those little kiss-ups, Rudolph and Blitzen.

Rob: I take it then that you have a—how shall I put this?—a complicated relationship with your teammates?

Donner: There’s nothing complicated about it. Some deer are just in it for a paycheck, ya know? But I take pride in my work. I like to think it has a transcendent value that goes beyond merchandising and album deals. Christmas used to mean something to me.

Rob: And it doesn’t any longer?

Donner: No, that’s not what I’m saying. It’s just hard to keep your heart in it sometimes when everyone around you is all meetings, process, deadlines, profit-margin, sales volume, market-share, blah, blah, blah. It can drive a deer to drink.

Rob: Uh huh. Well, in doing research for this interview, I see that you’re in a contract year. Don’t you think coming out with a tell-all book at this time is a little risky?

Donner: If not now, when? Look, I’m not worried about a new contract. Check my stats. Look at my consecutive starts. Longest record on the team and I’ve been doing this since 1823 for cryin’ out loud!

Donner: Hey, it’s all in the diet. Oh, and a summer home in Cabo. The sunshine’s great for stiff ligaments. Well that and DGH.

Donner: Deer Growth Hormone. Unlike the other NFL, we can use whatever supplements we want, just so long as we’re ready to go on gameday.

Rob: I see. So getting back to your contract…

Donner: They wouldn’t dare to let me go! I mean, who are they gonna get to replace me? Flying reindeer aren’t exactly a dime a dozen. And even if there were a crop of rookies waiting to take my job, let ’em try dealing with the airspace around O’Hare on Christmas Eve! Man, you wouldn’t believe the close calls! And the drones! Don’t get me started on drones! Why, after just one training flight, that rookie wouldn’t leave his stall for weeks! Child please.

Rob: Hmm. I never thought of that.

Rob: Uh, let’s get back to your book shall we? I see on the flyleaf that, and I quote, “A shocking exposé of the world’s favorite holiday franchise. Brutal. In depth. Heartbreaking. A story only a true insider can tell.”

Donner: That about sums it up.

Rob: Without giving away too much of the story, can you give us a little taste? What kinds of things will the reader find most revealing?

Donner: Oh, there are many things, like padding the Naughty List because of toy shortages. Misaddressed gifts due to shoddy quality control. The great Elf Strike of 1929. Rudolph’s prosthetic nose—yeah, it hasn’t lit up on its own for sixty years! Then there was that unfortunate photocopier incident with Mrs. Claus at last year’s after-Christmas party. Yikes!

Donner: Yes? Oh. You meant the other “dear.” Never mind. Anyway, there’s much more, but you’ll have to buy the book. Basically, what I most want to get across to my readers is what Christmas really is.

Rob: And that is?

Donner: The NFL didn’t invent Christmas. All we’ve tried to do—or at least we used to—is symbolize, in a very poor and limited way, the notion that there is Someone who knows you, loves you, and will stop at nothing to give you everything that is good, for your good. We’re not the main act. That happened in Bethlehem 2,000 years ago. I’m just trying to remind people about that.

Rob: Wow. That’s beautiful. I never knew reindeer were so deep and spiritual.

Donner: Well, when you’ve spent your entire career staring at the rear-end of another reindeer while hauling around a 300lb geezer loaded on eggnog , and a couple tons of presents, it gets you thinking, ya know?

Rob: I don’t know what to say to that.

Donner: Did I mention that the book is available at iTunes, Amazon and Barnes & Noble? If you’re giving the book as a gift, go the Kindle route. Our internet has been on the fritz for weeks so I wouldn’t count on us getting it there for you. Just sayin.

Rob: Well Donner, I know how busy you are this time of year. I just want to thank you again for this rare and, um, amazing interview.

Donner: My pleasure. Sorry for the mess on your rug. Merry Christmas!