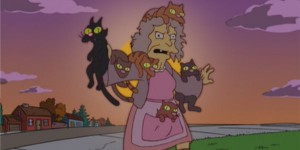 As a convert to the cat-loving faith, I have come to appreciate the many-faceted and wholly fascinating qualities of felis catus. Domestic cats are tremendously adaptable and expertly manipulative creatures who can simultaneously infuriate and soothe the human soul.

But damn. There’s a limit, no?

I don’t know what the deal is with Japan, but it seems they have yet another island completely overrun by small, furry critters.

END_OF_DOCUMENT_TOKEN_TO_BE_REPLACED

Speaking of pilgrimages, apparently the type of people who wear porkpie hats, drink artisinal beer, and only listen to obscure music exclusively on vinyl or reel-to-reel, have made the Portland International Airport (PDX) somewhat of a hipster mecca…in an ironic way of course.

Because the northwest corner of the US is home to high-tech, free-thinkers, and the world’s largest private bookstore with Portland as its epicenter?

It’s because of the carpet. Verily, I doth shit thee nary a whit.

END_OF_DOCUMENT_TOKEN_TO_BE_REPLACED

Being a ne’re-do-well has its disadvantages, if I’m honest. Doomed as we are to live in a world devoid of rainbows and unicorms and government cheese, one is still forced to make a living somehow.

As a result, I have learned many creative ways to get paid for doing nothing. Afterall, I gots to keep myself in scotch and Sterno now that winter’s here!

So one day, while taking a break from collecting lint from my neighbors dryer vents—

END_OF_DOCUMENT_TOKEN_TO_BE_REPLACED

…that civilization is DOOMED:

First Nik Wallenda and now this mope. When did the Discovery Channel decide it was better to be a 24×7 carnival freak show instead of offering interesting science documentaries?

Hell, people don’t want to learn anything anymore, they just want to watch colossal train wrecks and gawk at the carnage.

I’m sorry. I’m just bitter that Discovery turned down my proposal for Man vs. Bacon, wherein I eat a metric ton of fried bacon while dangling from a wire suspended from the roof of the Meat Packers Hall in Orland Park.

Maybe I can interest them in Human Frogger! See, I dress up in a green suit and dash across the Stevenson Expressway during rush hour. Granted, given my physical condition it’s probably a pretty short show, but hey, there’s bound to be lots of blood and stuff.

No? Well, at least I’m in there pitching!

For your edification, I present you with a selection of, ahem, artistic expressions from some noted, ahem, artists…ahem. What can I say? I’m a giver.

END_OF_DOCUMENT_TOKEN_TO_BE_REPLACED

Scotland votes for independence from Great Britain today. I’m not sure why this is a good idea, but in honor <ahem> of the rugged, Scottish people I give your the following.

Now if you’ll excuse me, I’m going to buy up every bottle of Glenlivet I can lay my hands on, ya know, just in case.

END_OF_DOCUMENT_TOKEN_TO_BE_REPLACED

Your iPhone is ruining your brain.

Researchers are worried that our reading and comprehension skills are being diminished by our many digital pursuits. Based on my own experience, I’d have to agree with them.

Full disclosure. I have an iPhone (I have been fully assimilated into the Borg). I have a Kindle. Although I do not own one, I have used iPads and Surfaces. I stare a computer all day.

I don’t know what I’d do without them.